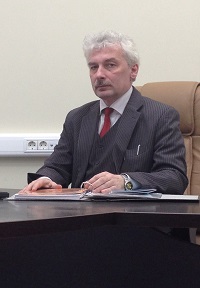 Secondary education received in school №105 Vyborg district of Leningrad, which graduated in 1980.

In 1980 I entered the Leningrad Polytechnic Institute. M.I. Kalinina (now SPbPU) to the faculty of technical cybernetics (FAU in 1980) for full-time studies. In 1981 began working at the department of descriptive geometry and drawing (DGD) of the LPI as a computer operator. In 1983 transferred to the evening department of LPI and continued studies in the same specialty - automated control systems. During this period, continued to work at the department DGD as an engineer.

In 1985 completed and defended a thesis project on the topic "The set-theoretic operation of three-dimensional synthesis of geometric objects of the type of gluing" with the rating "excellent". In the same year joined the MITOMD department as an engineer. From 1985 to 1987 studied at the Special Faculty for retraining of personnel in new promising areas of science. Successfully defended final work in the specialty "Pulsed and hydrostatic methods of metal forming, powder metallurgy". At the department, MITOMD was engaged in the development of algorithms and software for CAD of hot volumetric stamping under the guidance of Professor, Doctor of Technical Sciences L. Aksenov. In 1988 entered the graduate school at the department MITOMD, continuing to work on the same scientific topics. Particular attention was paid to the development of algorithms for three-dimensional solid-state geometric modeling of objects for the use of such models in the design of technological processes of hot die forging. At the same time, worked as an employee of a small enterprise at the metallurgical faculty under the leadership of Ph.D., associate professor Alaxander Zolotov and Ph.D. Yuriy Rybin.

In 1992 defended his thesis in two specialties (03.05.05 - Processes and Machines for Pressure Treatment; 05.01.01 - Applied Geometry and Engineering Graphics) on the subject "Designing of processes of hot-die forging using geometric modeling".

From 1995 to the present, worked at the Department of Applied Geometry and Design as an assistant professor. I give lectures and teach classes in descriptive geometry, information technologies in design, computer animation, multimedia design design, and other disciplines. I lead the graduate students enrolled in the department in the specialty 05.01.01.

Since March 2014 I have been working as Head of the Department of Informatics and Computer Design at St. Petersburg State University of Telecommunications.

I am a member of the House of Scientists Maxim Gorky from 04.12.1999 (member of the section of geometry, graphics and design).

February 10, 2010 defended doctoral thesis on the specialty 05.13.12 (branch - mechanical engineering) on the topic "The theory of automation of designing objects and processes based on methods of constructive geometric modeling" in SPbPU. On September 17 of the same year, on the recommendation of the Higher Attestation Commission, confirmed defense at the Aerospace University of Samara.

I am the author and developer of the system of constructive geometric modeling Simplex.

Mail: denis.voloshinov@yandex.ru
For all questions of the site, write to the mail: mail@voloshinov.ru